Ethiopian Airlines: Who are the victims?

Passengers from more than 30 countries were on board the Ethiopian Airlines flight from Addis Ababa to Nairobi that crashed on Sunday, killing 157 people.

Among the victims were 32 Kenyans, 18 Canadians, nine Ethiopians and seven Britons, according to a passenger list from the doomed flight published by Ethiopian officials.

A number of passengers are believed to have been affiliated with the UN.

Boeing 737 Max aircraft grounded ‘until May at…

Here’s what is known about some of the victims.

Senior Capt Yared Mulugeta Gatechew, who was of Kenyan and Ethiopian heritage, was the main pilot on Ethiopian Airlines Flight 302.

He had been working for the airline since November 2007.

He had a “commendable performance” with more than 8,000 hours in the air, the company said.

A friend of Capt Yared, Hassan Katende, said his “hair just stood up” when he heard that he had died.

In a BBC Amharic interview, Mr Katende said he learned of the crash through social media.

Among the victims was Cedric Asiavugwa, a third-year law student at Georgetown University.

He was travelling to Nairobi to attend the funeral of one of his relatives, reports say.

“With his passing, the Georgetown family has lost a stellar student, a great friend to many, and a dedicated champion for social justice across East Africa and the world,” Georgetown Law Dean William Treanor said.

Mr Asiavugwa was committed to issues of social justice, especially for refugees and other marginalised groups, the university said.

He also carried out research on subjects ranging from peace to food security in Kenya, Uganda, Tanzania and South Sudan.

Hussein Swaleh, a former Kenyan football administrator, also died in the crash, the Confederation of African Football (CAF) confirmed to the BBC.

The head of Kenya’s football federation tweeted that it was a “sad day for football”.

Mr Swaleh was reportedly returning home after officiating in a CAF Champions League match in Alexandria, Egypt, the CAF said in a statement. 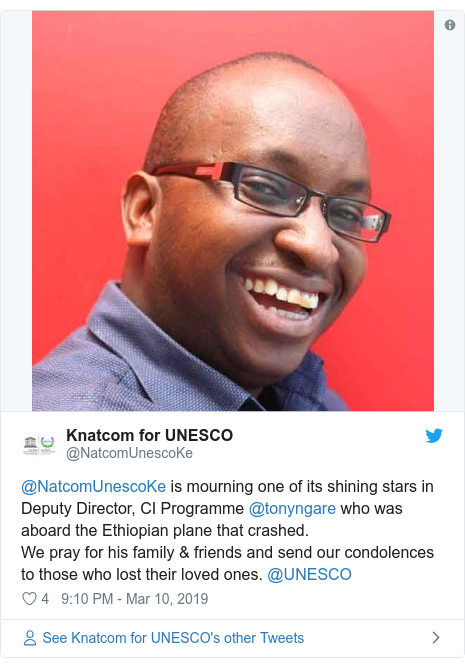 Tributes have been pouring in for former Kenyan journalist Anthony Ngare, 49, who was killed in the crash.

Mr Ngare had just represented Kenya at a UN conference in Paris and was on his way to Nairobi.

He was formerly an editor at local media house Standard Group and had also worked at a government agency.

At the time of his death, he was working for the UN’s cultural agency, Unesco, as a deputy director of communications.

The Kenya National Commission for Unesco described Mr Ngare as “one of its shining stars”.

Canada has confirmed that among the identified victims was Nigerian-born Professor Pius Adesanmi, the director of Carleton University’s Institute of African Studies.

“The contributions of Pius Adesanmi to Carleton are immeasurable,” said Pauline Rankin, dean of the Faculty of Arts and Social Sciences.

“He worked tirelessly to build the Institute of African Studies, to share his boundless passion for African literature and to connect with and support students. He was a scholar and teacher of the highest calibre who leaves a deep imprint on Carleton.”

Benoit-Antoine Bacon, president and vice-chancellor of Global Affairs Canada, said: “Pius Adesanmi was a towering figure in African and post-colonial scholarship and his sudden loss is a tragedy.”

Nigeria’s writers, scholars and journalists reacted to the news with “great shock and sadness”.

Prof Adesanmi was travelling to Nairobi to take part in a conference organised by the African Union, reports say.

Canadian-Somalian Amina Ibrahim Odowa and her five-year-old daughter, Sofia Abdulkadir, were also among the victims.

Ms Odowa and her daughter had been travelling to Kenya from their home in Edmonton for her wedding, her brother told the BBC.

“Her fiancé has not even had water since the news broke. He has not eaten anything. He is in bad shape. Our elder sister is also in shock. We are not ok. We hope to at least see her body.”

She leaves behind two other young daughters, who are being cared for by their grandmother, reports say.

Environmentalist Peter DeMarsh was on his way to a conference in Nairobi when the plane crashed, his sister Helen DeMarsh said on Facebook.

“Praying for him as we remember his brilliance, devotion to humanity and the wellbeing of the planet,” she wrote.

Mr DeMarsh had moved back home to New Brunswick to be close to his elderly mother, his sister said. He leaves behind a wife and a son.

Derick Lwugi, 54, an accountant and pastor from Calgary, was another victim, CBC News reported. He is described as a “pillar” of Calgary’s Kenyan community.

He leaves behind his wife, who is a domestic abuse councillor, and three children aged 17, 19 and 20.

Danielle Moore, 24, was travelling to a UN environment conference in Nairobi.

On 9 March, she posted a message on Facebook: “I’m so excited to share that I’ve been selected to attend and am currently en route to the United Nations Environment Assembly in Nairobi, Kenya with United Nations Association In Canada and #CanadaServiceCorps / #LeadersToday!

“Over the next week I’ll have the opportunity to discuss global environmental issues, share stories, and connect with other youth and leaders from all over the world. I feel beyond privileged to be receiving this opportunity, and want to share as much with folks back home.”

Ms Moore studied marine biology at Dalhousie University and later at the Bermuda Institute of Ocean Sciences in 2015.

She was working both as a member of the clean ocean advocacy group Ocean Wise and as an education lead at the charity Canada Learning Code.

Sara Gebre Michael was the lead hostess on board the Ethiopian Airlines Flight302.

Prominent Ethiopian artist Tesfaye Mamo, who was her neighbour, told the BBC she was a caring mother, and would be sorely missed.

She is survived by her husband and three children.

Nigeria’s foreign affairs minister has tweeted about a Nigerian victim on board, a retired diplomat, Ambassador Abiodun Bashua.

Joanna Toole, 36, was on board the Boeing 737 Max 8 that crashed shortly after takeoff near Addis Ababa.

Ms Toole was from Exmouth, UK, but was living in Rome, her father Adrian Toole said.

“I’m very proud of what she achieved. It’s just tragic that she couldn’t carry on to further her career and achieve more.”

“She was very well known in her own line of business and we’ve had many tributes already paid to her,” he added.

His son, Ben Kuria, said he was still in shock after hearing that his father, who moved to the UK in 2004, was on board the flight. Mr Kuria described him as a “generous” man who “loved justice”.

A father-of-three, Mr Waithaka lived in Hull and worked for the Humberside Probation Trust before returning to live in Kenya in 2015.

Another victim was identified as Sarah Auffret, a University of Plymouth graduate and a polar tourism expert.

Ms Auffret was on her way to Nairobi to talk about the Clean Seas project in connection with the UN Environment Assembly this week, according to her Norway-based employers Association of Arctic Expedition Cruise Operators (AECO).

“Words cannot describe the sorrow and despair we feel. We have lost a true friend and beloved colleague,” the AECO said in a statement.

Anne-Katrin Feigl was a German national who worked for the UN migration agency, the IOM. Ms Feigl was en route to a training course in Nairobi, the IOM said in a statement.

Catherine Northing, chief of the IOM mission in Sudan where Ms Feigl worked, called her “an extremely valued colleague and popular staff member, committed and professional”, saying “her tragic passing has left a big hole and we will all miss her greatly”.

The IOM said it would fly its flag at half-mast tomorrow, along with other UN agencies, as a mark of respect.

Hospitality company Tamarind Group announced “with immense shock and grief” that its chief executive Jonathan Seex was among those killed.

“Our thoughts and prayers are with his family, friends and the Tamarind community and all the others who have suffered unfathomable losses,” the company said in a statement.

Tamarind Group is one of Africa’s leading restaurant and hospitality firms.

Dr Kodjo Glato, a professor at the University of Lomé, was the only Togolese national on board.

In a statement (in French), the University of Lomé offered condolences to Dr Glato’s family.

Ryan Brown, Johannesburg bureau chief for international news organisation CS Monitor, tweeted that Dr Glato had “a passion for sweet potatoes and how they could be used to improve food security in West Africa”.

Slovakia
Slovak lawmaker Anton Hrnko announced with “deep grief” that his wife Blanka, son Martin and daughter Michala died in the crash. Details of a fourth Slovak have not yet been released.

Italy
World Food Programme employees Maria Pilar Buzzetti and Virginia Chimenti, as well as Paolo Dieci, a founder of the non-governmental organisation, were among eight Italian nationals who died in the crash.

They were in Africa on holiday, Ria Novosti quoted Sberbank as saying.

A third Russian victim was identified as Sergei Vyalikov.

Karoline Aadland, 28, was a programme finance co-ordinator for the Norwegian Red Cross.

“Our thoughts are with her next of kin. Our focus is on providing them with assistance in this difficult time,” the Norwegian Red Cross tweeted.

His projects included creating safe ground for Rohingya refugees in Bangladesh and assessing the damage to rural roads in Nepal blocked by landslides.

Details have not yet emerged about victims from China (eight), five other Italian nationals, the US (eight), France (seven), Egypt (six), four other German nationals, India (four), Austria (three), two other Swedish nationals, as well as two each from Spain, Israel, Morocco and Poland, and one from Belgium, Djibouti, Indonesia, Mozambique, Rwanda, Saudi Arabia, Sudan, Somalia, Serbia, Uganda, Yemen, Nepal and Nigeria.

‘My ex-boyfriend brutally raped me, said he’s hurting me because he loves me’

Sep 9, 2022 10,947
Follow Us
We use cookies on our website to give you the most relevant experience by remembering your preferences and repeat visits. By clicking “Accept All”, you consent to the use of ALL the cookies. However, you may visit "Cookie Settings" to provide a controlled consent.
Cookie SettingsAccept All
Manage consent