Nigerian billionaire Ned Nwoko who is husband to actress Regina Daniels has raised alarm that there is a plot to assassinate him.

Nwoko called for a press conference on Thursday, 11 February, 2021 in Abuja and made the revelation claiming the assassination was in connection with a piece of land in his community in Delta.

The billionaire is currently building a University in Delta and he thinks the plot to assassinate him is in connection with that particular land.

He also stated that a tussle about who becomes the next traditional ruler of his community was also another significant factor that might have resulted in the plot.

“Last wife or not, I am happy” Regina Daniels on… 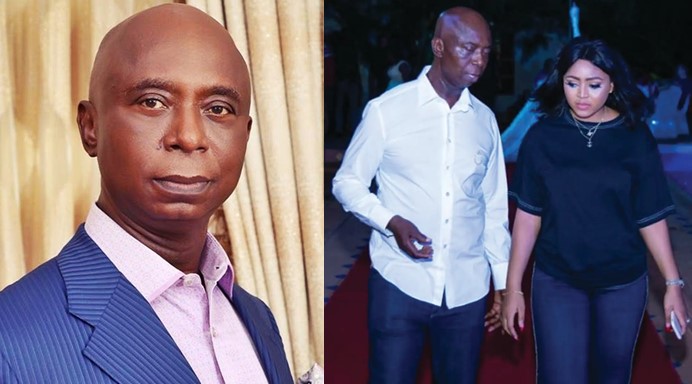 Nwoko a well-known polygamist said he was informed about the plot by Mr Ossy Bosah who was serving a jail term at Kuje Prison in Abuja who got hold of the plan from fellow inmates.

He also revealed that the death of Bosah could have been connected to the plot. He said Bosah got life threatening text messages shortly after he was released from prison.

“Bosah was able to get the information on social media and the attention of my wife, Regina, was drawn to it. I then reported the matter to the Police and Department of State Security (DSS) and they went and interviewed the inmates involved.

“The inmates mentioned the name of one businessman who deals in the oil and gas sector as the master minder,” he said.

He also stated that he had petitioned the inspector General of Police about the plot.

Part of the petition read, “Kindly recall the issue of the land which was duly allocated to me by my community upon which I am building a private university of sports- first of its kind in Sub-Sahara Africa.

“I was reliably informed by my wife Regina Daniels, who was also informed by one Mr Wale Jana that the suspects who were arrested and remanded at the Kuje Correctional Centre in connection with the murder case in my village are plotting to cause me harm and possibly kill me.”

He called on security agencies to take action over the threat to his life, stating that the person who leaked the information was also killed.

Babes Wodumo reveals why she’s still in love with Mampintsha

Babes Wodumo reveals why she’s still in love with Mampintsha

Davido says his billionaire father used to be a worker at…

Burna Boy set to perform at the Grammys 2021 premiere…

Davido says his billionaire father used to be a worker at…

Zodwa Wabantu does U-turn on R10m Lamborghini after SMS from…