A televised rape trial in South Africa has prompted a furious public backlash after a witness – who says she was raped by her pastor from the age of 14 – was subjected to a lengthy and, at times, aggressively intimate cross-examination by the lawyer representing a 60-year-old Nigerian televangelist, Timothy Omotoso, who denies the allegation.

Warning: This piece contains graphic content which may upset some readers.

Unathi attacks SA men – ‘Your silence is so loud…

Top official in South Africa’s ANC in court over…

Can Biden do better than Trump in Africa?

Fraud charges against teacher who identified himself as…

Over the weekend, Mr Omotoso’s church, in the coastal city of Port Elizabeth, was forced to shut its door after angry crowds besieged the building, while a Sunday newspaper reported that the woman who gave evidence against him – Cheryl Zondi, now a 22-year-old student – had received death threats ahead of the trial.

The trial – the first prominent rape case to be broadcast live in a country where more than 100 rapes are reported to the police each day – has attracted huge interest, and raised difficult questions about victims’ rights, impartiality and whether justice is best served by having television cameras in courtrooms.

Anti-apartheid icon Nelson Mandela’s granddaughter, Ndileka Mandela – who said in 2017 that she had been raped by a former boyfriend – is one of many South African women who have voiced support for Ms Zondi, linking her experience to the global #MeToo movement.

Ms Mandela argued that the student’s treatment during three days in the witness box helped explain why so many rape victims stay silent in a nation with notoriously high levels of sexual violence.

Miracles and prophecies
“I really feel pain for this young woman and I am so proud to see how courageous she’s been on the witness stand,” Ms Mandela told South Africa’s Sunday Times newspaper.

Mr Omotoso and two female co-accused, from the Jesus Dominion International church, based in South Africa’s Eastern Cape, are facing 97 charges, ranging from sexual assault to rape and human trafficking. They deny all the charges.

The church – one of a growing number of evangelical ministries in the country, promising miracles and prophecies for its followers – is known for its videos of uniformed young women singers, some of whom have appeared on the Idols SA television contest.

Since it began last week, the nation seems to have stopped in its tracks to follow the trial, and social media erupted in support and sympathy for Ms Zondi.

She was the first prosecution witness and told the court, with great composure, that Mr Omotoso – quoting the psalms and threatening God’s anger if she did not comply – had allegedly repeatedly raped her a year after she had joined his church as a child.

Shouts in the courtroom

“I put it to you that you are lying about what happened to you.

“You were prepared to let him rape you?

“You basically consented?” he asked, referring to later alleged incidents when Ms Zondi was an adult.

But in this case, according to the opinion of some experts and ordinary South Africans, Mr Daubermann appeared to cross a line.

“How many centimetres? Do you know?” he asked Ms Zondi, after she had described how the pastor had allegedly partially penetrated her, at the age of 14.

There were cries and shouts in the courtroom.

“How would she know that?” Judge Mandela Makaula interrupted, visibly angry.

“She could have felt it,” suggested Mr Daubermann.

“And measured it at the same time? No. I will not allow that question,” declared the judge, who went on to thank Ms Zondi for her testimony and to wish her good luck in the university exams she had interrupted in order to attend the trial.

“This is not about you. This is about justice,” he told her.

“Cheryl has set a precedent and we can only pray other victims will be encouraged by this. We salute her,” a local spokesman for the National Prosecuting Authority told journalists.

But Mr Omotoso’s defence team has since hit back, accusing the judge of showing bias and asking him to recuse himself from the trial.

“You aligned yourself with her cause. You have already accepted her version,” Mr Daubermann told Judge Makaula, arguing that the trial should start again from scratch, and bitterly condemning the media coverage of the case and the social-media frenzy it has triggered. 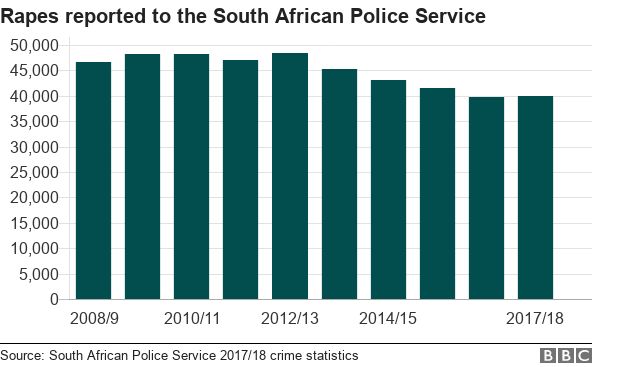 “I’ve been vilified in the media for my cross-examination. I’ve been accused of adopting questionable methods of examination. That is blatantly false. I have to test the veracity of the evidence. I can’t allow sensibilities to get in the way of my duty,” said the lawyer after he had been followed and harangued on the street outside the courthouse by an angry crowd.

Judge Makaula refused to recuse himself, saying: “The application has no merit.”

The Pistorius trial was the first to be broadcast live and in full in South Africa.

Since then, the courts have allowed television cameras into a succession of high-profile trials, but while supporters argue that it is important for the population of a young democracy to see the workings of its legal system, critics argue that the presence of cameras inevitably distorts the process and brings unfair pressure on those involved – in the Omotoso trial, for instance, potentially inflaming xenophobic attitudes towards Nigerians.

Ms Zondi, who has since thanked the public for their support, could have chosen – like some witnesses in the Pistorius trial – to give her evidence without the cameras rolling, but declined to do so.

Many more witnesses are now expected to testify against the televangelist, who was dramatically arrested at an airport last year as he sought to leave the country.

He maintains his innocence and continues to enjoy the support of many members of his predominantly female congregation.

In court, his wife has been criticised by the judge for appearing to laugh and comment on Ms Zondi’s evidence, while Mr Omotoso himself has appeared relaxed, often smiling, and sporting an array of brightly coloured suits as South Africans wait to hear his version of events.

What to do if you are raped:

‘I have to protect my energy first’ Da L.E.S speaks on ‘beef’…

‘I have no words’ DJ Black Coffee humbled by Grammy nomination

‘I have to protect my energy first’ Da L.E.S…

Ntsiki Mazwai speaks out against fired Unathi Nkayi getting…

‘I have no words’ DJ Black Coffee humbled by…

P-Square: Nigerian Afrobeats twins make up after years of…

‘If De Klerk gets a state funeral, we must disrupt…

Nov 16, 2021 43,719
Loading ... Load More Posts No More Posts
Follow Us
We use cookies on our website to give you the most relevant experience by remembering your preferences and repeat visits. By clicking “Accept All”, you consent to the use of ALL the cookies. However, you may visit "Cookie Settings" to provide a controlled consent.
Cookie SettingsAccept All
Manage consent

This website uses cookies to improve your experience while you navigate through the website. Out of these, the cookies that are categorized as necessary are stored on your browser as they are essential for the working of basic functionalities of the website. We also use third-party cookies that help us analyze and understand how you use this website. These cookies will be stored in your browser only with your consent. You also have the option to opt-out of these cookies. But opting out of some of these cookies may affect your browsing experience.
Necessary Always Enabled
Necessary cookies are absolutely essential for the website to function properly. This category only includes cookies that ensures basic functionalities and security features of the website. These cookies do not store any personal information.
Non-necessary
Any cookies that may not be particularly necessary for the website to function and is used specifically to collect user personal data via analytics, ads, other embedded contents are termed as non-necessary cookies. It is mandatory to procure user consent prior to running these cookies on your website.
SAVE & ACCEPT
Posting....
Sign in
Sign in