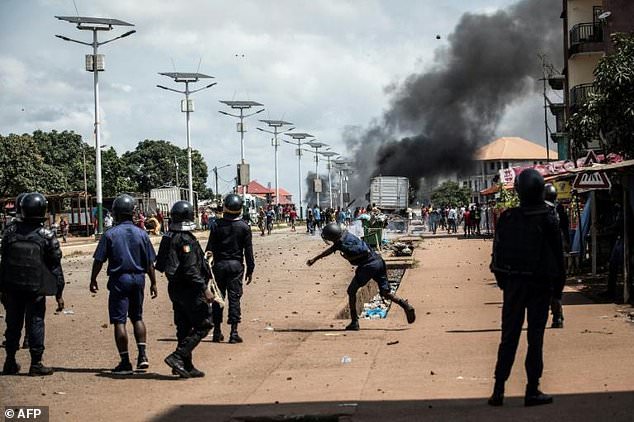 Officers arrested the vice president of Guinea’s leading opposition party, the UFDG, on Wednesday. But over a hundred other people — mainly activists — have also been caught in the police dragnet.

The operation comes after President Alpha Conde, 82, won a controversial third presidential term after topping an October 18 poll with 59.5 percent of the votes, according to official results released on Saturday.

Opposition leader Cellou Diallo, from the UFDG party, had declared himself victorious after the election and alleged voter fraud.

Guinea economy crippled by protests as fears for mining grow

Guinea poised for referendum date despite protests against…

That move triggered nationwide clashes between his supporters and security forces in which the government said at least 21 people were killed. The UFDG party put the death toll at 46.

While observers from other African countries have backed the official results, France, the European Union and United States have cast doubt.

As part of the recent sweep operation, Guinean police have detained detained or tried 137 people in the capital Conakry alone, a state prosecutor named Sidy Souleymane Ndiaye said in a statement on Tuesday.

Officers held some for participating in illegal demonstrations, and others for the use of weapons or criminal assocation.

A further 16 people have been jailed for butchering four people with machetes on October 23 during an attack on a freight train in Conakry, the prosecutor said.

Another opposition figure told AFP that he is waiting for officers to turn up.

Police are still seeking several opposition activists “who have made threats likely to disturb public safety and disorder,” according to the prosecutor.

Diallo, 68, called the police operation an “electoral coup d’etat” in a statement on social media on Wednesday, and accused Conde of seeking to “decapitate” his party.

Political tension in Guinea centres on Conde’s third term, against which there have been rolling protests since October 2019.

The president pushed through a new constitution in March which he argued would modernise the country. But it also allowed him to bypass a two-term limit for presidents.

“We are going to start putting things in order, there will be no more disorder in Guinea,” Conde said on Saturday.

A former opposition leader himself who suffered imprisonment and was even sentenced to death, Conde became Guinea’s first democratically-elected leader in 2010 and won re-election in 2015.

Hopes of a new political dawn in the former French colony have withered, however, and he has been accused of drifting into authoritarianism. AFP.

Nigeria in trauma after illegal refinery blast kills over 100 – Buhari

Rwanda’s Kagame flies to Uganda for birthday of…

Nigeria in trauma after illegal refinery blast kills over…

Follow Us
We use cookies on our website to give you the most relevant experience by remembering your preferences and repeat visits. By clicking “Accept All”, you consent to the use of ALL the cookies. However, you may visit "Cookie Settings" to provide a controlled consent.
Cookie SettingsAccept All
Manage consent

This website uses cookies to improve your experience while you navigate through the website. Out of these, the cookies that are categorized as necessary are stored on your browser as they are essential for the working of basic functionalities of the website. We also use third-party cookies that help us analyze and understand how you use this website. These cookies will be stored in your browser only with your consent. You also have the option to opt-out of these cookies. But opting out of some of these cookies may affect your browsing experience.
Necessary Always Enabled
Necessary cookies are absolutely essential for the website to function properly. This category only includes cookies that ensures basic functionalities and security features of the website. These cookies do not store any personal information.
Non-necessary
Any cookies that may not be particularly necessary for the website to function and is used specifically to collect user personal data via analytics, ads, other embedded contents are termed as non-necessary cookies. It is mandatory to procure user consent prior to running these cookies on your website.
SAVE & ACCEPT
Posting....
Sign in
Sign in